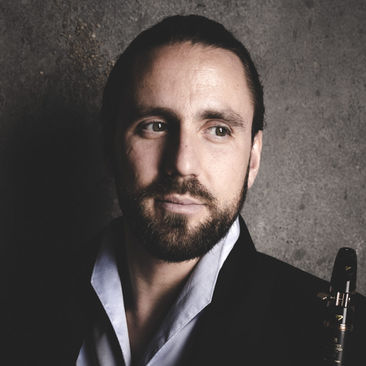 Born in 1986, Franck Russo is currently Principal Clarinet of the Orchester Symphonique de l'Opéra de Toulon Provence Méditerranée. It was at the CRR in Rueil-Malmaison that he began his professional studies with Florent Héau, winning a 1st prize, a prize of excellence and a 1st prize for chamber music in the class of Michel Moraguès in 2006. The same year , he was unanimously received at the CNSM in Paris, in the class of Michel Arrignon, a true Master of the French School. He obtained his prize there with Jérôme Julien-Laférière with honors.

Winner of the Banque Populaire and Meyer foundations as well as numerous international competitions (Printemps de Prague, Classic Winds in Hamburg and Tel Aviv, Debussy in Paris, Nielsen in Denmark, Lancelot in Rouen and Tokyo), Franck won 3rd prize, the prize for public and the "Young Talent of the Nocturnes de la Cathédrale de Rouen" prize at the 1st Jacques Lancelot International Competition as well as a special prize for the best interpretation of Claude Debussy's Rhapsody at the 2014 Tokyo Competition. Prague, just before joining the Orchestra, he won the 3rd prize in the prestigious competition. In March 2020, just before the pandemic, he won the 1st prize and special prize for the piece "Verdiana" by Alexey Shor at the "Classic Winds" competition in Tel Aviv, Israel.

Passionate about chamber music, he followed the lessons of Daria Hovora in sonata with the pianist Pierre-Yves Hodica. The duo then formed won the Grand Prix of the city of Le Havre at the Forum Musical de Normandie, and obtained a 1st prize at the CNSMDP. Among other numerous concerts and festivals, they also participated in the program “Plaisirs d'amour” hosted by Frédéric Lodéon on France Musique, or “énérations Jeunes Interprètes” by Gaëlle Legallic.

He recorded his first album “A la Nuit” / “In der Nacht” around Schumann and Schubert. For this project, he chose to surround himself with talented artists: Laurianne Corneille at the piano, a Schumanian recognized by critics, who released her first Schumann record on Klarthe Records "L'Hermaphrodite", and Lia Naviliat-Cuncic soprano an artist with multiple faces and facets, equally at ease in the baroque, sacred, contemporary, classical, German and French lied repertoire, and even folk! The disc will be released in Spring 2022!

Franck has also invested himself under the teachings of David Walter and Henry Fourès in the clarinet quartet. He therefore arranges for this group various pieces by classical composers inspired by different folklore, notably from Eastern Europe, and wins the 1st prize at the 26th European Competition for Ensemble Music FNAPEC 2012 in Paris. The Quartet obtains its prize unanimously with the congratulations of the jury before winning a Master's degree. The ensemble will be releasing their 1st album very soon.

He is also involved in La Compagnie Traintamarre de 7h10 which brings together the performing arts, music, theatre, poetry and storytelling. After more than 90 performances of "Contes de l'Isba" a musical journey in Eastern Europe, the structure is now working on a new show, around the Quatuor pour la fin du temps by Olivier Messiaen.