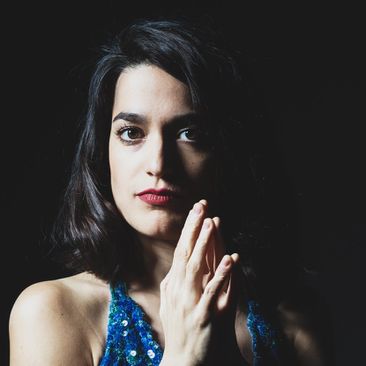 Saskia Giorgini’s latest album of Franz Liszt’s Harmonies Poétiques et Religieuses (Pentatone) has been selected as Instrumental Choice of the Month in the BBC Music Magazine with a 5 star review, as a pick of the week on December 2nd in the Guardian and will receive a Diapason d’or in the February issue. It has been widely praised: “Her masterful authority immediately captures your attention” ( Gramophone); “Her Liszt is simply stunning. Her lyrical signature is just as overwhelming as the technical allure of her playing” (Opus Klassiek)

She has made other two recordings for Pentatone: an acclaimed Schöne Müllerin and Respighi Songs with tenor Ian Bostridge.

Winner of the International Mozart Competition in Salzburg in 2016, where she also got the special prize for the best interpretation of the commissioned work, Saskia Giorgini is also winner of the special Chopin Special Prize at the 2015 Busoni Piano Competition. She is praised for her unerring technique, a beautiful and moving sound, a phrasing full of fantasy and a pure musicality .

Upcoming projects include: the Enescu Festival in Bucharest, with the Athens State Orchestra and Stefanos Tsialis, MiTo Festival and other concerts in Italy, at the Elbphilharmonie Hamburg, Konzerthaus Wien, Musikverein in Graz with Liszt’s piano concerto n.2,  in Switzerland, Germany, The Netherlands, Finland, Norway, Denmark, Lithuania.

Ms. Giorgini received her first piano lessons at the age of four. At fifteen she was admitted to the piano academy “Incontri col Maestro” in Imola, where she studied with Riccardo Risaliti, Leonid Margarius and Louis Lortie. At the same time she graduated from the Conservatorio di Torino with Claudio Voghera, with the highest grades and honours. She then completed her studies at the  Accademia di Musica di Pinerolo with Enrico Pace, at the KUG in Graz with Julius Drake, and at the Mozarteum Salzburg with Pavel Gililov.

Saskia Giorgini is a Bösendorfer Artist.

“A superb recording.. a miraculous experience…a major voice in the world of Liszt”
International Piano